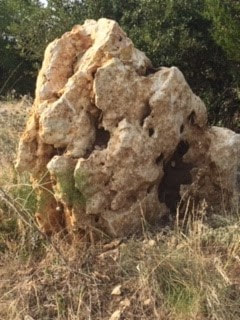 Every Crevice a Story:

The Boulder as Teacher

There is a huge boulder that is taller than I am that I see frequently on my walks. It never fails to fascinate me.  It seems to be a mixture of sandstone and limestone.  What I love about it is the way it has dark and light places created by weather and rain and light and clouds.  There is no way I could even begin to budge it even with every ounce of my strength.  It is heavy and enormous.

Sometimes things don't need or want to be changed quickly.  This boulder will change with time, pressure and weather, but it will not change because of anything I do to it.  My job it to appreciate it as it is and share its space.  This large rock will probably not be in any one's painting or in some famous museum, but it is in my photo gallery of nature teachers.  It has stood the test of time. It has let nature and storms form it and shape it, yet it stands strong and has its own kind of rugged beauty.

The wear and tear of life does shape us. In it all is the formation of strength, character and teaching memories.  Perhaps as I look in the mirror and see lines beginning to form and age encroaching, I can think of it as strength, character and beauty.  Each crevice in the boulder and each wrinkle on my hands show the passage of time and life.  If every crack in the rock and every line on my face could tell their stories, I know that the messages would be worthwhile teachers.  They are lessons of love, time, forgiveness, endurance, and a constant reformation.   For all these things, I give thanks.

How to survive and flourish in life?  One way is by creatively adjusting to each new environment and condition, opening yourself to novelty.  This is the way of many a young mammal.  Another is to slow down, rest in the quiet stillness of here, accepting the slow changes that come with time and erosion, all the while being true to who you are. This is the way of the boulder.  Both have their place.

To choose the way of the boulder is itself a novel response, but it would be justified even if not novel.  It is a serious mistake to think that in novelty, and novelty alone, life flourishes.  Life flourishes in stability, too, and in an acceptance of limits.  There’s a maturity in the boulder-response, to which Nita Gilger’s note gives testimony.  And there’s also a maturity in her willingness to learn from the more-than-human world: to turn from the world of human ideas and sacred texts to worlds that are belovedly “other” than human, from whose strategies for survival and flourishing we have so much to learn about, as Nita Gilger says, "love, time, forgiveness, endurance and a constant reformation."