​The Practice of Not-Knowing

​X = The Practice of Mystery 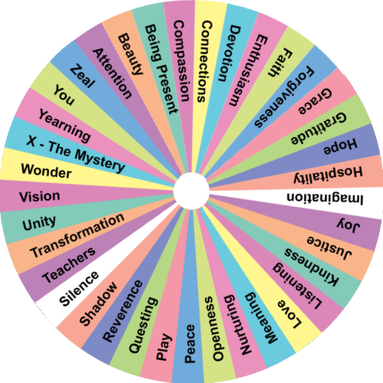 Thank you, Single Buddhist Dad, for your prose-poem, originally titled Just Try on your webpage.  I hope it's alright that I repost it as The Practice of Not Knowing.

I write this as a Married Christian Dad influenced by Buddhism.  Your prose-poem speaks to me as it does to many.  It captures ever so simply part of what we at the Center for Process Spirituality in Arkansas (CaPSA) mean by "spirituality."

CaPSA is deeply indebted to the work of Frederic and Mary Ann Brussat in Spirituality and Practice.  Their interfaith website (the largest in the world) offers an Alphabet of Spiritual Literacy that gives us names for what we ourselves call the spiritual side of life.  You might like it, too.

It seems to me that your prose-poem is especially helpful in illustrating one of the practices in their alphabet: the practice of X: The Mystery.  And certainly your path in creative writing illustrates what they call the practice of Imagination.  I know from other writings of yours that you also practice Love and Silence.  I'm sure that you'll find yourself all over the place.

I'd like to say a further word about the Practice of Mystery as you present it.  The practice may sound easy, but it is much more difficult than it sounds.  It is much more than, and entirely different from, willful ignorance.  It consists of quieting the mind (difficult) in order to realize that you don’t know some things you might wish you knew (also difficult) and then of living with the reality of not-knowing (also difficult).

The first step (quieting the mind) is a good place to start.  This is why, in Zen Buddhism, the practice of seated meditation, without clinging to words and chasing ideas in your mind, is so important.  It helps quiet the mind so that you can live with the not-knowing, sometimes even joyfully.  In Soto Zen this practice is also considered to be a practice of the true self: that is, the already enlightened self beyond definitions which is the not-knowing and which is intimately connected with the wider world.

In scholarly circles this practice of not-knowing is called apophaticism.  The word comes from the Greek apophatikos ‘negative’, from apophasis ‘denial’, and from apo- ‘other than’ + phanai ‘speak’.

Jews, Christians, and Muslims usually approach apophaticism in light of the un-enframeability of God, as illustrated, for example, by the famous mystical text The Cloud of Unknowing.  The idea is that God is a realility that cannot be encased or framed in words and letters, but only in a relinquishment of them, so that God is "seen" in the "un-knowing."  Single Buddhist Dad (Mike Mueller) embodies a similar approach, albeit in terms of the mystery of life not God.  These two can seem very different, but they share the sense that there is wisdom in un-knowing: that is, in recognizing the limits of the mind to have “answers" to some really big questions, needed or not.  The obverse side of this recognition is a sense of freedom in not-knowing itself.  A freedom to “just try” without knowing the outcome in advance.   A freedom to be imperfect.   A freedom to accept the human condition of not-knowing, not as a curse but also as a blessing.  A freedom to be baffled and enjoy the bafflement.

In Spirituality and Practice, as noted above, Frederic and Mary Ann Brussat speak of the practice of bafflement as the Practice of Mystery:
​
To be spiritual is to have an abiding respect for the great mysteries of life — the profound distinctiveness of other souls, the strange beauty of nature and the animal world, the ineffable complexity of our inner selves, the unfathomable depths of the Inexplicable One. The wisdom traditions challenge us to live within a cloud of unknowing.
​
The first step in the practice of mystery is to cherish the baffling, curious, hidden, and inscrutable dimensions of your existence and the world around you. Live with paradoxes. Give up the idea that you can always "get it." Be suspicious of all the "ologies" that try to explain everything — from astrology to psychology to theology. Whenever you are honestly stumped by the existence of evil, injustice, or suffering, resist the temptation to ask "Why?" And never be afraid to admit "I don't know."
​
It seems to me, Single Buddhist Dad, that you put the Brussats’ point succinctly and beautifully.  You offer a Zen approach to the honesty, and perhaps even the simple joy, of resting in the bafflement, knowing that you cannot, and need not, always "get it."