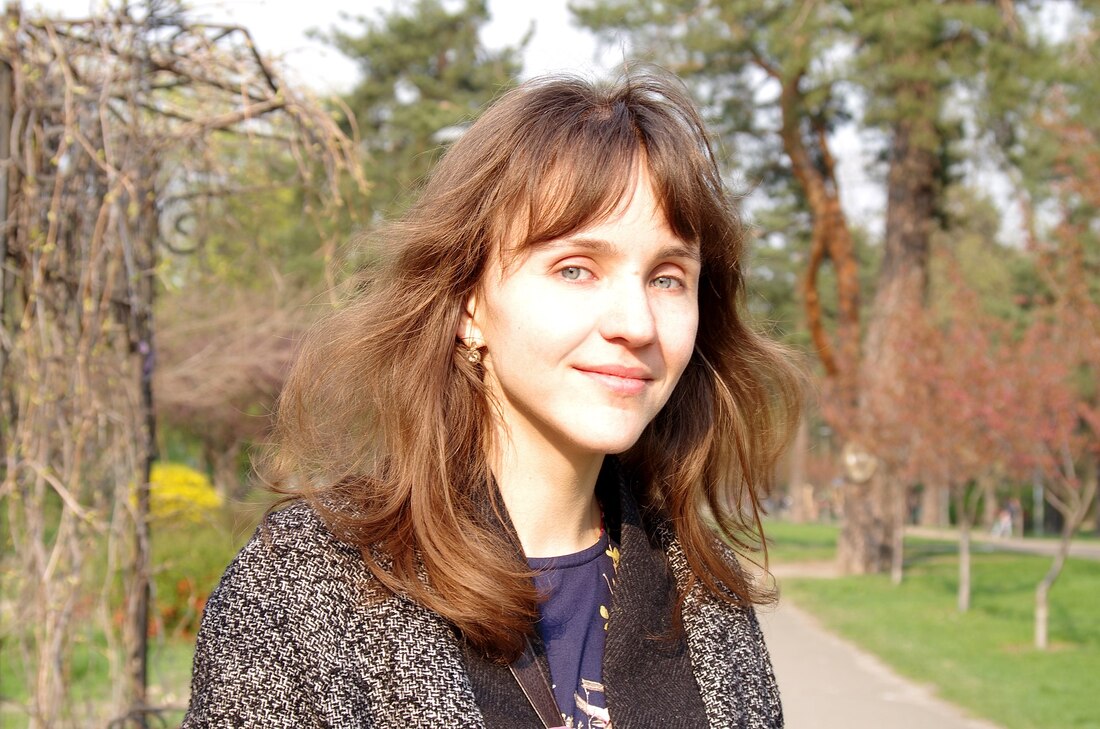 ​"February is sobbing...and the candle drips on the table." 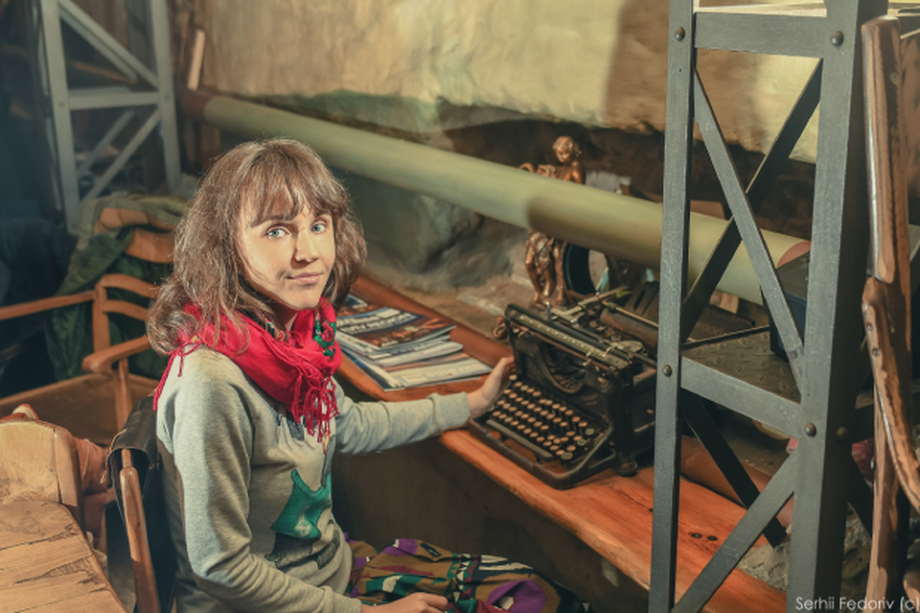 Iya Kiva. Photo credit: Serhii Fedoriv
Iya Kiva is a poet, translator, and journalist living in Kyiv, Ukraine. She is the author of two volumes of poetry, Further from Heaven (Podal’she ot raya, 2018) and The First Page of Winter (Persha storinka zimy, 2019), and the recipient of numerous awards for her poetry and translation.
​
Iya Kiva Facebook Page

By Katherine E. Young
​
​from Words without Borders website
​

Kiva was born and raised in a Russian-speaking environment in Donetsk, and she graduated from the local university. Nevertheless, she and her family took a pro-Ukrainian stance in the conflict. Friends and friends of friends were wounded or killed; one committed suicide. In the summer of 2014, Kiva was forced to flee Donetsk, leaving everything behind. Since then, she has lived as a war refugee in Kyiv, Ukraine’s capital. According to Kiva, she began to write “completely differently” after these events. In wartime, she writes, “luxuriant metaphors seem superfluous to me. Difficult times demand simplicity in speaking. But that’s just formal minimalism. I don’t mean semantic simplification. I mean something like the inability to put on a beautiful, expensive dress if everyone around you is a beggar.”

*
​
Poetically speaking, Kiva is something of a contradiction: a poet of contemporary Ukraine who most often expresses herself in Russian (although she also writes in Ukrainian); a once-formal poet who now frequently employs techniques of free verse, collage, and montage; a war refugee who by her own account can’t seem to right herself, even far from the front lines.

Not surprisingly for a poet who’s spent most of the last six years as a refugee, themes of memory, violence, trauma, and borders/transitions run through Kiva’s poems. She also explores states of alienation and separation, ways people fragment and become disconnected while paradoxically “connecting” via digits and pixels. Death is another of Kiva’s preoccupations: “[D]eath interests me not as ‘we’re all going to die, how terrible,’ but as a particular variant of violence. And as a complex psychological problem. That is, not as an ending, but as a breaking-off, an incompletion.”
Kiva is also known to Russian-language readers for her poems about the Second World War, including poems that explore the complex history of Ukraine’s Jewish population. She says wryly that many consider her poems “gloomy and depressing,” although she insists that’s not the case. One of her interests as an artist is precisely the moment when things deviate from perceived norms, from convention. Her life, she writes, is not typical, easy, or smooth: “My poems look very much like my life.”

This coffin’s for you, little boy, don’t be afraid, lie down,
A bullet called life clutched tight in your fist,
We didn’t believe in death, look – the crosses are tinfoil.
Do you hear – all the bell towers tore out their tongues?
We won’t forget you, believe it, believe it, be …
Belief bleeds down the seam inside your sleeve,
Chants, prayers, psalms well up in a lump in your throat
In the middle of this damned winter all dressed in khaki,
And February, getting the ink, is sobbing.
And the candle drips on the table, burning and burning…

Translated from the Russian by Amelia Glaser and Yuliya Ilchuk, 2014
to hold a needle of silence in your mouth
to stitch your words in white thread
to whimper while drowning in spit
to keep from screaming spitting blood
to hold the water of a language on your tongue
which leaks like a rusty bucket
to mend things that are still useful
to sew crosses on the really weak spots
like bandages on the wounded in a hospital
to learn to search for the roots of a life
that has yet to learn its name
​
Translated from the Ukrainian by Amelia Glaser and Yuliya Ilchuk, 2019
and when it came my turn to be killed
everyone started to speak Lithuanian
everyone started to call me Yanukas
summoned me hither to their native land
my god I said I am not Lithuanian
my god I told them I said it in Yiddish
my god I told them I said it in Russian
my god I said to them in Ukrainian
there where the Kalmius flows into the Neman
a child is crying in a church

Translated from the Russian by Amelia Glaser and Yuliya Ilchuk, 2016
​
Amelia Glaser is Associate Professor of Russian and Comparative Literature at U.C. San Diego. She is the author of Jews and Ukrainians in Russia’s Literary Borderlands (2012) and Songs in Dark Times: Yiddish Poetry of Struggle from Scottsboro to Palestine (2020).
​
Yuliya Ilchuk is Assistant Professor of Slavic Languages and Literatures at Stanford University. She is the author of Nikolai Gogol: Performing Hybrid Identity (2021).

​The Year of Ukraine
​by Iya Kiva
​
see here we got what we wanted
now Serhiy Nigoyan’s graffiti on the wall
in the square across the way kids play at war
in Donbas the adults are also at play
a square looms on Google Maps another square
it’s a house it’s a boy with a rifle in his hands
if they tell him to shoot he surely will shoot
eff your mother our common motherland
at the store folks load whole sacks with macaroni
and afterwards bury the boxes somewhere
what’s that what crawls down that distant slope
it’s your coffin carried by security troops
we were here you’ll say no we haven’t been here
someone else was killed by sniper fire here
and snow nailed those who came after to earth
the lord’s summer has gone it wasn’t enough.

​Translated from the Russian by Katherine E. Young

Kirk Lawrence reads one of
"Three Poems" by Iya Kiva
​

​PEN Ukraine is a voluntary civic organization of Ukrainian authors for promotion of free literary creation, press & media, and the whole scope of democratic values.

Since the beginning of the war of aggression of the Russian Federation against Ukraine, the Ukrainian branch of the International PEN Club has been compiling news selections for foreign audiences. Based on these selections, we have created a page war.pen.org.ua , which contains information about the situation in Ukraine, links to important materials and information resources, petitions, appeals, selections of publications about Ukraine in English and books by Ukrainian authors recommended for translation. The page is constantly updated by us and is supplemented with current news and links.

This page also presents videos of our new online project "Dialogues about the War" , in which Ukrainian and foreign intellectuals talk about the experience of the war and share their own observations.

In addition, you will find a selection of 30 books in English that will help foreign audiences better understand the history of Ukraine and its path since independence.

At the end of the page there are verified sources of information about Ukraine.

We encourage you to share this information with your acquaintances abroad.

You can go to the page at the link: war.pen.org.ua.

​This page is a celebration of Ukrainian culture.  See also:

​Process Theology and Ukrainian Avant-Garde Music;
​We, between Past and Future: Artists in Kyiv, Ukraine
​​Seeing the World in Vivid Colors: A Ukrainian Gift to Ecological Civilization
​New Music from Ukraine