"May I Give this Ukrainian Bread
to all the People in this Big Wide World?"

​Maria Pryimachenko, Ukrainian Folk Artist (1908-1997), offers an image of a Ukrainian peasant offering bread to "this big wide world." We humbly receive the bread in being inspired by the bravery of Ukrainian people and the beauty of its culture; as we share the tears of Ukrainians under assault; and as we do what we can to create a "big wide world" that is enriched by a plurality of cultures, hospitable to each and all. This is the kind of world to which process theology points, suggesting that even the Holy One, the companion to the world's sufferings and joys, shares in the tears and works for the good of the whole, enriched by the bread she offers. The Holy One is not a tyrant or dictator.  The Holy One has no munitions. The Holy One is a bread maker. 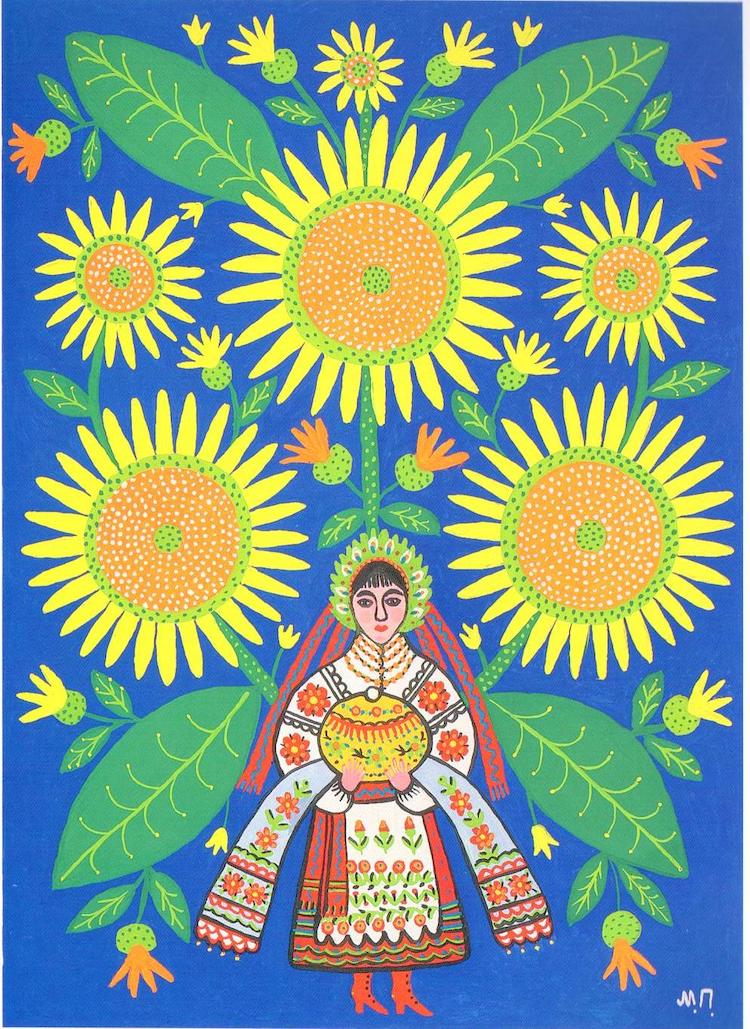 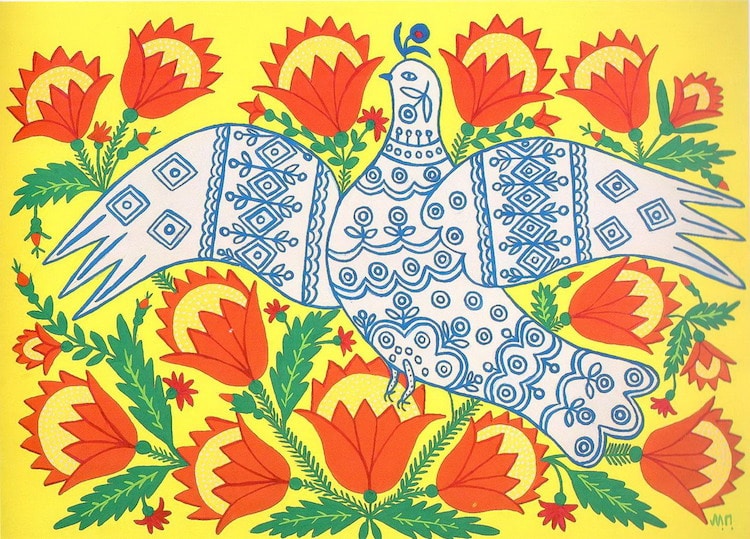 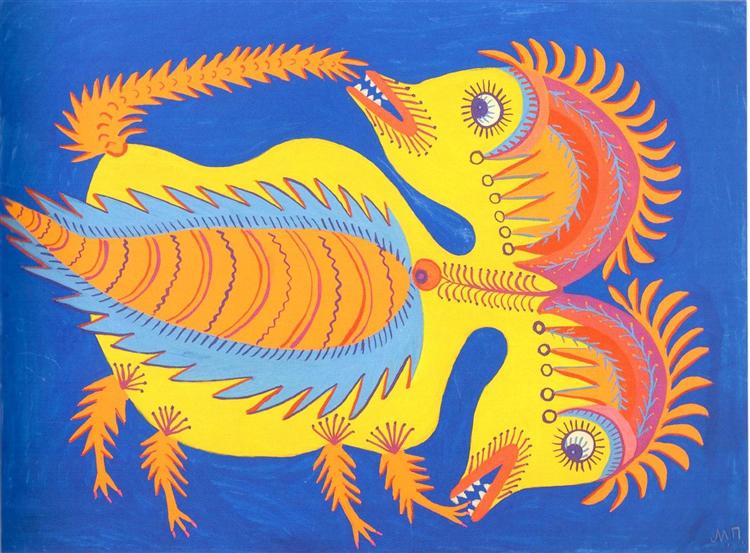 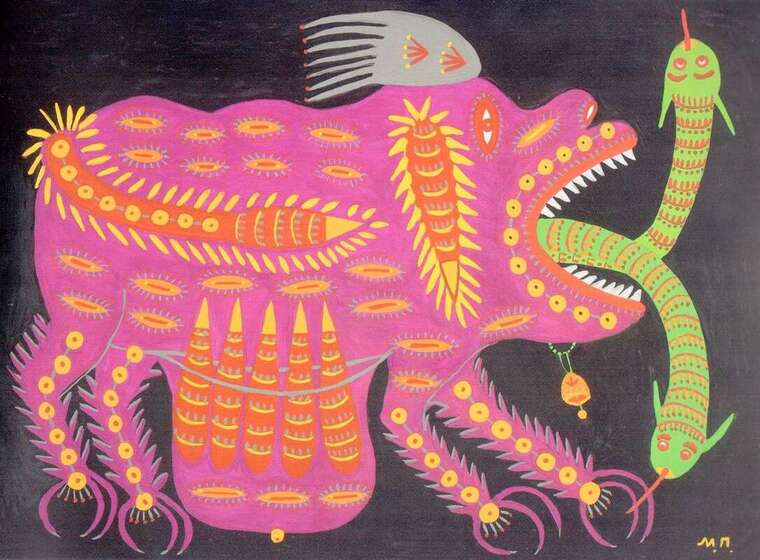 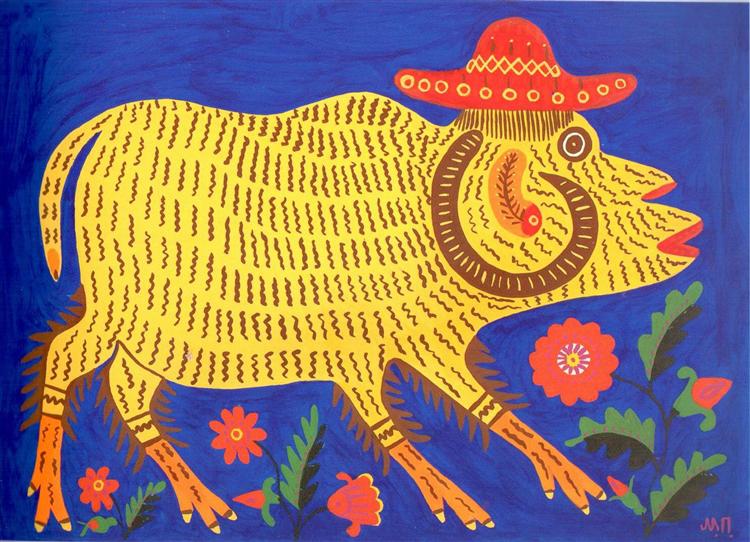 This Ukrainian Ram Did Not Gather His Crop 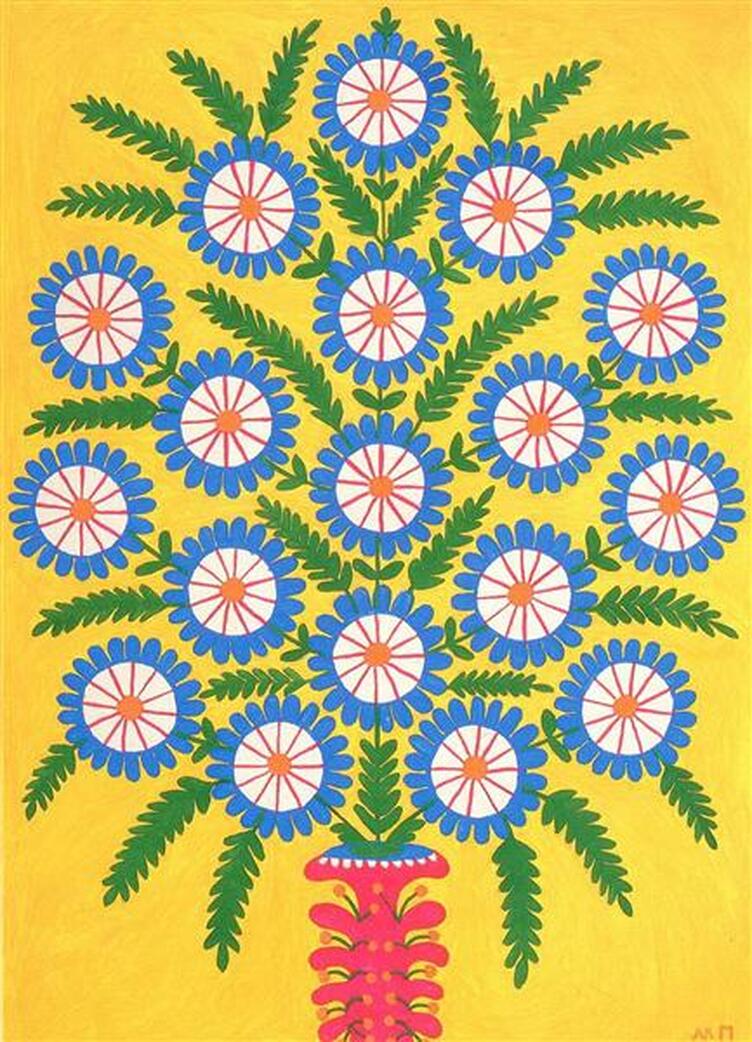 I give my little stars to children, 1983

About Maria Pryimachenko
​from Wikipedia
​

Maria was a peasant woman. She was born and spent all her life in the village of Bolotnya in the Ivankiv Raion, Kiev Oblast, situated only 30 km (19 mi) from Chernobyl.

Іn her childhood Maria was taken ill with polio, and this painful disease influenced the girl's life. By reports of her relatives, Maria grew а thoughtful and considerate person, having compassion for nature and every living thing.

Her way in art began, by her own words, like this: "Once, as a young girl, I was tending a gaggle of geese. When I got with them to a sandy beach, on the bank of the river, after crossing a field dotted with wild flowers, I began to draw real and imaginary flowers with a stick on the sand… Later, I decided to paint the walls of my house using natural pigments. After that I’ve never stopped drawing and painting."

Mysterious and emotionally charged, the works of Maria Pryimachenko, a folk master of Ukrainian decorative painting, seem to absorb the age-old traditions of many generations of Ukrainian master-craftsmen who, from the depths of the centuries, have brought forth their understanding of good and evil, of ugliness and beauty.

Images often had арреаred to the artist in dreams and later materialized in her compositions. Maria Pryimachenko's art works depict fabulous mythological beasts and take their roots in folk legends and fairy-tales, nourished bу real life and culture of the Ukrainian реорlе.

The works of Pryimachenko can be subdivided into thematic, symbolic and ornamental pieces. All compositions are characterized by a subtle and fluent rhythmical arrangement. There is a maxim: "Style makes man." As for Pryimachenko, one can state this in reverse: man makes style, for Maria Pryimachenko has developed a style of her own. In this evolution one can discern traces of constructivism (1930s); the victory of harmony (1960s- 1970s); and the decorative approach (1980s). Her latest works impress one by their daring decorativeness of form. Pryimachenko gravitates to the world of fairy-tale and mystery: her birds, beasts and plants interact on her pictures just as harmoniously and easily as they do in natural surroundings. Philosophy of the good animates the content of her works. The good embodied in the images of 'kind' beasts and birds (lions, bears, hares, storks, swallows) is juxtaposed against the evil, this mighty force which is sometimes difficult to identify with certain living things. The artist often resorts to her favoured device of personification: she depicts fabulous animals with large eyes surrounded with a trim of eyelashes.

Thematic compositions occupy a special place in Pryimachenko's creative legacy as far as the complexity of compositional arrangement and harmonious balance are concerned. Raw actuality and fairy-tale become blended in her compositions into one single whole, triumphantly demonstrating the unity of Nature. People depicted in these compositions are composed and full of dignity and self-respect. Her early compositions were executed against a white background, associated with the whitewashed walls of peasant cottages. But in the 1970s-1980s the artist turned to coloured backgrounds. It seems that colour itself creates the effect of colour-bearing space. There are no professional secrets in her arsenal: she paints on Whatman paper with factory-manufactured brushes and uses gouache and water colours. She prefers gouache which gives a bright and thick decorative base with graphic contours. Apart from searches in colour scheme, the artist strives to achieve expressive outlines and an effective rhythmical arrangement. Another salient feature of Prymachenko's art is a keen sense of composition, which is especially evident in her choice of format. Horizontal formats are most suitable for topical and multifigured compositions depicting subsequent scenes of the narration, while the vertical format is used for representative decorative compositions.
This is a part of the Wikipedia article used under the Creative Commons Attribution-Sharealike 3.0 Unported License (CC-BY-SA). The full text of the article is here →

This page is a celebration of Ukrainian culture.  See also:

​Process Theology and Ukrainian Avant-Garde Music;
​We, between Past and Future: Artists in Kyiv, Ukraine
​​Seeing the World in Vivid Colors: A Ukrainian Gift to Ecological Civilization
​New Music from Ukraine
Open Horizons