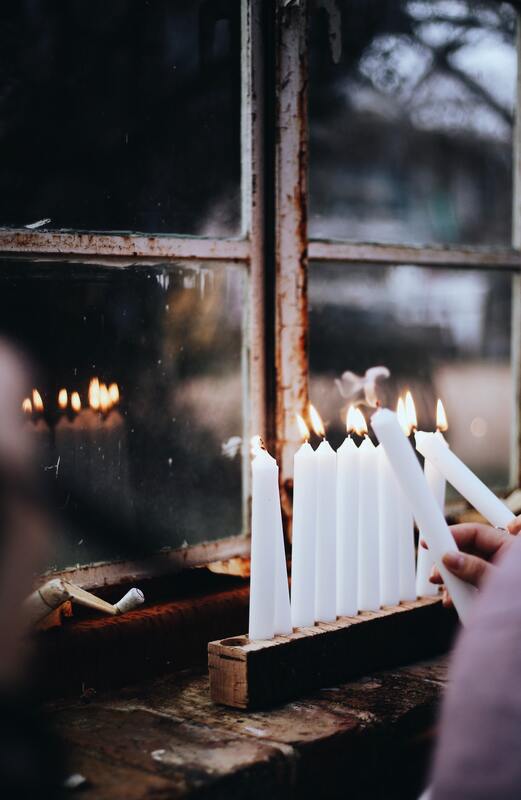 The Redemptive Power of Light
​
Hanukkah as an invitation to hope

​On this final eve of Hanukkah we gaze at the glow of a full Menorah, each light shining as it should. It reminds us of the Promise, and of our possibilities: a world where everyone is adequately fed, engaged in meaningful work, educated, safe, connected to community. Do we dare to look into the light? Do we dare to make that dream our goal? Do we dare to be the modern Maccabees who make it real?

​Hanukkah: Faith in Better Times Ahead

a moment of Torah with Rabbi Bradley Artson
​

In process theology faith is trust in the availability of fresh possibilities. To count on their coming, as Rabbi Artson puts it in the video above.  These possibilities are gifts to us; they come to us intuitively, in our imaginations, both individually and collectively.  Some process theologians speak of them as initial aims: subjectively felt goals or aims which lie in the depths of our lives, moment by moment, emerging from out of the darkness, adjusted to each new situation.

Please note: darkness per se is not the enemy of these possibilities; it is their womb.  We humans need darkness as much as we need light.  But a certain kind of darkness can also be present in our lives that is indeed destructive: the darkness of despair, the darkness of giving up.  This is the kind of darkness Rabbi Artson addresses above.  It is the darkness we feel when we see all the violence, all the antagonisms, in the world today, some of which are inside our own hearts.

As Rabbi Artson emphasizes, Hanukkah is a time to hope for "better times ahead" and to live in ways that help realize those hopes in this world.  And if we are in despair, Hanukkah is a time to find the courage, inwardly, to trust that the possibilities are available, even if we can't immediately feel them.  It is a sin, says Rabbi Artson, to abandon this trust.  It is like abandoning life itself.  Life itself is too precious to be abandoned.  Hanukkah is an invitation to choose life.

Who gets to choose?  We all do.  Certainly Hanukkah belongs to Jews.  Gentiles like me do Jews a disservice if we fail to appreciate the particularity and uniqueness of Hanukkah as a Jewish tradition.  Let the beauty of Hanukkah be Jewish.  And yet, as Rabbi Artson emphasizes in so many of his writings, Judaism itself is a wisdom tradition from which the world can learn.  In this sense Hanukkah belongs to everyone: to people of other faiths and to people without any religious affiliation. It is an invitation to hold onto the light and not give in to the darkness of despair, no matter how tempting.

Bottom line? Let the lights of Hanukkah symbolize fresh possibilities derived from the Holy.  Not that divine light can make everything as we wish or even as God wishes. The light of God is not all-powerful.  See God Almighty? No Way! by Rabbi Artson.  But the light is all-hopeful.  God never gives up on us, no matter what the circumstances.  God is faithful to us, even when we are not faithful to ourselves.  Hanukkah is a time to renew our faith in Faithful One.

This, for me as a Gentile, is the meaning of Hanukkah.  I am thankful to the evolving Jewish tradition, and to Rabbi Artson, for this candle.
​
- Jay McDaniel, 11/29/2021

​What is Process Theology, Anyway?
​
see also Process and Faith, The Cobb Institute, and Process Nexus

Engineer Ari and the Hanukkah Mishap

A children's teaching story about a Jew and a Muslim
​ celebrating Hanukkah together in a very special place.

Rabbi Artson is a speaker, educator, and philosopher, and is the Vice President of the American Jewish University in Los Angeles. We discuss octopi and butterflies, he explains how he invented process theology on his own only to find out that he’d been beaten to the punch, and he shares some hot takes on Hanukkah that you probably haven’t heard before. Click here to learn more about Carry the Fire podcasts.
​Train engineer Ari is in Jerusalem picking up things for the celebration of Hanukkah at his home. On the way, other Jews remind him of the history of a victory by the Maccabees over the army of a mighty Syrian king. When they restored the Holy Temple in Jerusalem a miracle happened: the seven branched menorah burned for eight days even though there was only enough oil for one day.

Engineer Ari boards his train to Jaffa, dreaming of the holiday celebrations with his friends. But he has to bring the train to a sudden stop to avoid hitting a camel seated on the tracks. The owner of the camel, Kalil (which means friend in Arabic), is a Bedouin. He helps Ari pick up his scattered Hanukkah things. By chance, the engineer picks up a coin from the time of the Maccabees. He learns they are on the very spot where the Maccabees once lived. Kalil invites Ari to his tent and accepts an offer by his new friend to celebrate Hanukkah together.
​
This is a timely teaching story by Deborah Bodin Cohen that brings a devout Jew together with a Bedouin on a Jewish holiday rich with history and meaning. The mutual hospitality of the two men is a miracle in its own right. This children's book is designed for children from the ages of 4 to 8.

The Redemptive Power of Light

by Frederic and Mary Ann Brussat
in Spirituality and Practice
​

In Judaism, the redemptive power of light is most poignantly present in the celebration of Hanukkah, a winter festival of lights that lasts eight days. This holiday commemorates the time during the second century BCE when Judas Maccabaeus and his family led the Jews against the oppression of Syrian-Greek rulers. After their triumph, they found that the Temple in Jerusalem was dirty and desecrated. They discovered a jar with enough oil to keep the Temple lit for one day. But much to their surprise and delight, the lamp kept going for eight days.
​
What Hanukkah Signifies:

"We light the Hanukkah candles to remember the miracle that even a small light can dominate a vast darkness. The light represents the holiness that lies within each of us. Eight is a number that signifies 'beyond the normal.' Seven is a complete unit, as in the seven days of the week. Eight is then one beyond completion.
​
"In lighting our menorah, we ignite the flame in our souls, the spark that cannot be extinguished that will burn not for eight days but for eternity. We place the menorah in our windows to be visible to those passing by, just as our inner light must shine against the darkness of evil and indifference and must kindle the spirits of our fellow humans. The menorah reminds us of the miracle that no matter how dark life may be, there remains a source of light deep inside us. The light in our souls reflects and refracts the light from the One who is all brightness."
​
— Michard Strassfeld in A Book of Life

More Essays and Poetry by Rabbi Bradley Artson in Open Horizons
​
​Prayer Facing Imminent Death
To Dust You Shall Return: Our Alienation from Death and the World
Vibrating over the Face of the Deep: God’s Creating, and Ours
Revisiting Creation, Natural Events, and Their Emergent Patterns
Ever Dying, Never Dead – That’s Life
CLAY in the Potter’s Hands: Human Evolution in a Self-Creating World
Dynamic God, Evolving World: Judaism and Process Thought
​Everyone is Someone’s Jacob: What I’ve Learned From My Autistic Son
​The Twenty Third Psalm in a Pandemic Age
​Le-Hayim: Jewish Wisdom for a Time of Pandemic
​God is Life and Life is Holy: A Moment of Torah
Expanding Circles of Thanks
Welcome my Atheist Friend, Religion is too Precious to Leave to Believers
​Holy Forgetting: Rabbi Bradley Shavit Artson
​God is Becoming: Consolation in the Face of Tragedy​
We Carry Their Names: A Daily Practice Inspired by Torah
How we Speak, Not Just what we Say: Rabbi Bradley Artson​
Science isn't Just "How," Religion isn't Just "Why"
Jewish and Process: Interview with Rabbi Bradley Artson
Jewish Wisdom for a World in Need: Reading the Bible with Help from Rabbi Artson
God Almighty? No Way!
What Are We Doing When We Pray?
The Hidden Holiness of the Secular New Year
Voting is Holy
One Dove's Pluck
Prayer on Mother's Day
Dancing with Your from "Here" to "There"
Child of God
Prayer for the Homeless
Process and Torah
The Bible is a Book of Inclusion and Love
What is a Miracle
Not in Our Name
Avina Malkeinu
Thirty Six Lures for Feeling
After the Earthquake
A Lament That Never Ends
A Prayer for All of Us
Come What May
She is a Benefit to Herself
Four Reasons I'm Bound to Israel
Turtles and Whales
Judaism: An Introduction
犹太教：生活方式、哲学、文化以及信念犹太教：生活方式、哲学、文化以及信念​
​Becoming - East and West
Only in This Should You Glory
Vibrating Over the Face of the Deep
​Voting Biblically
To Choose Life
Self-Evident Truths
Pulse: When Dancing is Political
The Omer: Teaching Us to Count Our Days
Two Thanksgiving Essays
Jewish Environmentalism
The Risk (and Glory) of Freedom
Open Horizons