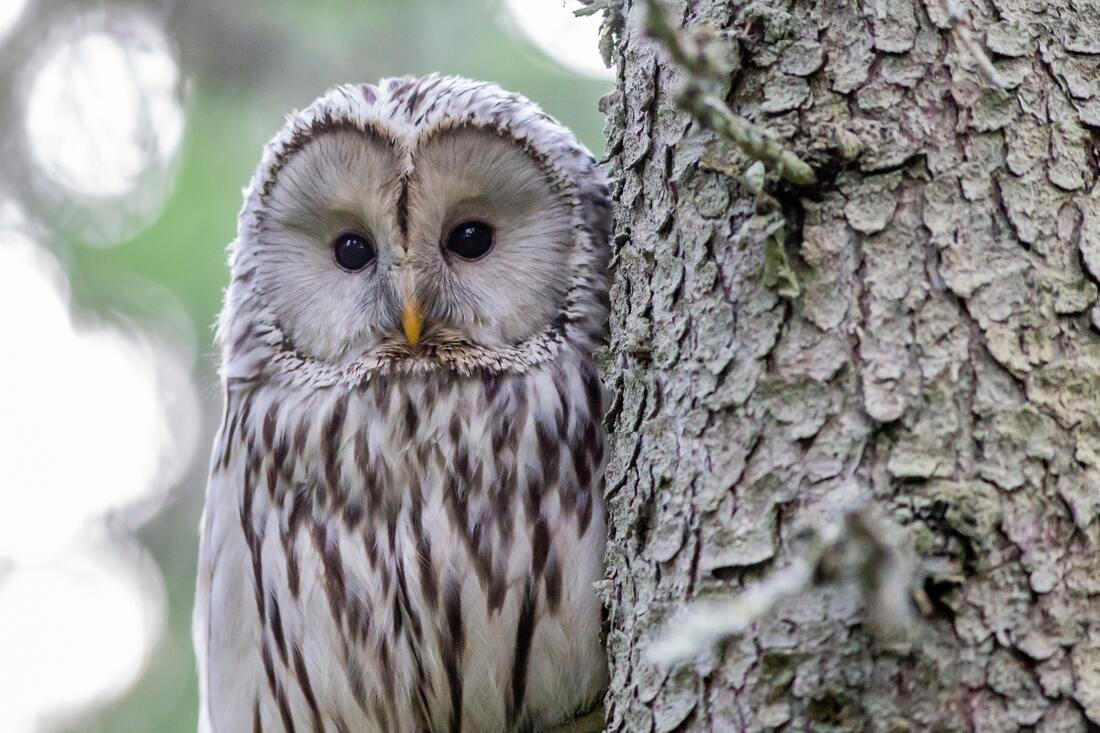 ​
Click here for index of all titles in Open Horizons.

​A Miscellany of Recent Offerings
​

​new to the process ​world?

here are some pages that will help you get started 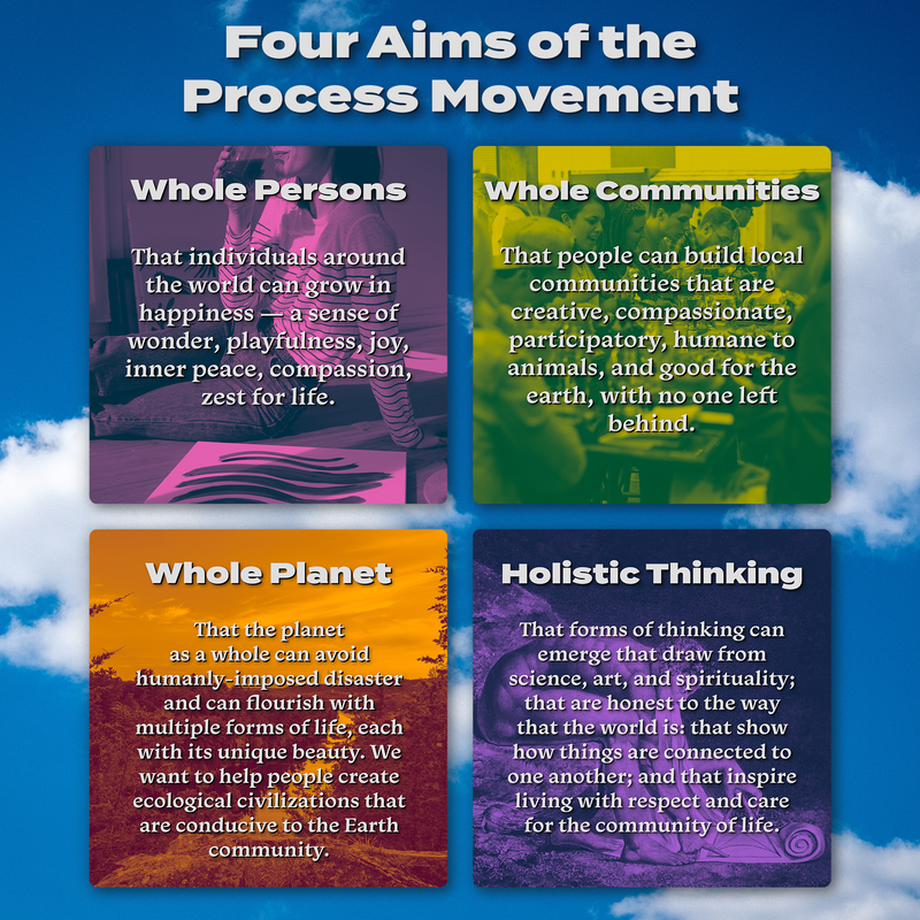 1. Process: The universe is an ongoing process of development and change, never quite the same at any two moments. Every entity in the universe is best understood as a process of becoming that emerges through its interactions with others. The beings of the world are becomings.

4. Nature as Alive: The natural world has value in itself and all living beings are worthy of respect and care. Rocks and trees, hills and rivers are not simply facts in the world; they are also acts of self-realization. The whole of nature is alive with value. We humans dwell within, not apart from, the Ten Thousand Things. We, too, have value.

5. Ethics: Humans find their fulfillment in living in harmony with the earth and compassionately with each other. The ethical life lies in living with respect and care for other people and the larger community of life. Justice is fidelity to the bonds of relationship. A just society is also a free and peaceful society. It is creative, compassionate, participatory, ecologically wise, and spiritually satisfying - with no one left behind.

6. Novelty: Humans find their fulfillment in being open to new ideas, insights, and experiences that may have no parallel in the past. Even as we learn from the past, we must be open to the future. God is present in the world, among other ways, through novel possibilities. Human happiness is found, not only in wisdom and compassion, but also in creativity.

7. Thinking and Feeling: The human mind is not limited to reasoning but also includes feeling, intuiting, imagining; all of these activities can work together toward understanding. Even reasoning is a form of feeling: that is, feeling the presence of ideas and responding to them. There are many forms of wisdom: mathematical, spatial, verbal, kinesthetic, empathic, logical, and spiritual.

8. Relational Selfhood: Human beings are not skin-encapsulated egos cut off from the world by the boundaries of the skin, but persons-in-community whose interactions with others are partly definitive of their own internal existence. We depend for our existence on friends, family, and mentors; on food and clothing and shelter; on cultural traditions and the natural world. The communitarians are right: there is no "self" apart from connections with others. The individualists are right, too. Each person is unique, deserving of respect and care. Other animals deserve respect and care, too.

9. Complementary Thinking: The process way leans toward both-and thinking, not either-or thinking. The rational life consists not only of identifying facts and appealing to evidence, but taking apparent conflicting ideas and showing how they can be woven into wholes, with each side contributing to the other. In Whitehead’s thought these wholes are called contrasts. To be "reasonable" is to be empirical but also imaginative: exploring new ideas and seeing how they might fit together, complementing one another.

10. Theory and Practice: Theory affects practice and practice affects theory; a dichotomy between the two is false. What people do affects how they think and how they think affects what they do. Learning can occur from body to mind: that is, by doing things; and not simply from mind to body.

12. Relational Power: This is the power that is experienced when people dwell in mutually enhancing relations, such that both are “empowered” through their relations with one another. In international relations, this would be the kind of empowerment that occurs when governments enter into trade relations that are mutually beneficial and serve the wider society; in parenting, this would be the power that parents and children enjoy when, even amid a hierarchical relationship, there is respect on both sides and the relationship strengthens parents and children.

13. The Primacy of Particularity: There is a difference between abstract ideas that are abstracted from concrete events in the world, and the events themselves. The fallacy of misplaced concreteness lies in confusing the abstractions with the concrete events and focusing more on the abstract than the particular.

14. Experience in the Mode of Causal Efficacy: Human experience is not restricted to acting on things or actively interpreting a passive world. It begins by a conscious and unconscious receiving of events into life and being causally affected or influenced by what is received. This occurs through the mediation of the body but can also occur through a reception of the moods and feelings of other people (and animals).

15. Concern for the Vulnerable: Humans are gathered together in a web of felt connections, such that they share in one another’s sufferings and are responsible to one another. Humans can share feelings and be affected by one another’s feelings in a spirit of mutual sympathy. The measure of a society does not lie in questions of appearance, affluence, and marketable achievement, but in how it treats those whom Jesus called "the least of these" -- the neglected, the powerless, the marginalized, the otherwise forgotten.

16. Evil: “Evil” is a name for debilitating suffering from which humans and other living beings suffer, and also for the missed potential from which they suffer. Evil is powerful and real; it is not merely the absence of good. “Harm” is a name for activities, undertaken by human beings, which inflict such suffering on others and themselves, and which cut off their potential. Evil can be structural as well as personal. Systems -- not simply people -- can be conduits for harm.

17. Education as a Lifelong Process: Human life is itself a journey from birth (and perhaps before) to death (and perhaps after) and the journey is itself a process of character development over time. Formal education in the classroom is a context to facilitate the process, but the process continues throughout a lifetime. Education requires romance, precision, and generalization. Learning is best when people want to learn.

18. Religion and Science: Religion and Science are both human activities, evolving over time, which can be attuned to the depths of reality. Science focuses on forms of energy which are subject to replicable experiments and which can be rendered into mathematical terms; religion begins with awe at the beauty of the universe, awakens to the interconnections of things, and helps people discover the norms which are part of the very make-up of the universe itself.

19. God: The universe unfolds within a larger life – a love supreme – who is continuously present within each actuality as a lure toward wholeness relevant to the situation at hand. In human life we experience this reality as an inner calling toward wisdom, compassion, and creativity. Whenever we see these three realities in human life we see the presence of this love, thus named or not. This love is the Soul of the universe and we are small but included in its life not unlike the way in which embryos dwell within a womb, or fish swim within an ocean, or stars travel throught the sky. This Soul can be addressed in many ways, and one of the most important words for addressing the Soul is "God." The stars and galaxies are the body of God and any forms of life which exist on other planets are enfolded in the life of God, as is life on earth. God is a circle whose center is everywhere and circumference nowhere. As God beckons human beings toward wisdom, compassion, and creativity, God does not know the outcome of the beckoning in advance, because the future does not exist to be known. But God is steadfast in love; a friend to the friendless; and a source of inner peace. God can be conceived as "father" or "mother" or "lover" or "friend." God is love.

20. Faith: Faith is not intellectual assent to creeds or doctrines but rather trust in divine love. To trust in love is to trust in the availability of fresh possibilities relative to each situation; to trust that love is ultimately more powerful than violence; to trust that even the galaxies and planets are drawn by a loving presence; and to trust that, no matter what happens, all things are somehow gathered into a wider beauty. This beauty is the Adventure of the Universe as One.
​

Many people from around the world visit the site.  They include viewers from Venezuela, Korea, Kenya, Canada, Germany, Phillipines, Mexico, Botswana, Sweden, Turkey, England, Brazil, and the United States.  And a few from mainland China, too, where the process movement is growing rapidly.

Some visitors are affiliated with one or another of the world's religions and some are spiritual independents.  All are welcome.

The contributors to Open Horizons include artists, photographers, musicians, poets, clerks, accountants, farmers, theologians, and philosophers.  They share many of the ideas and aims offered above, as understood in their own ways, and are committed to the practices, especially that of living with respect and care for life.

Join the Claremont Process Nexus.
Join the Cobb Institute: A Community of Process and Practice.
Join Process and Faith: A Multi-Religious Network.
Support the The Center for Process Studies.
​Support the Institute for Ecological Civilization. 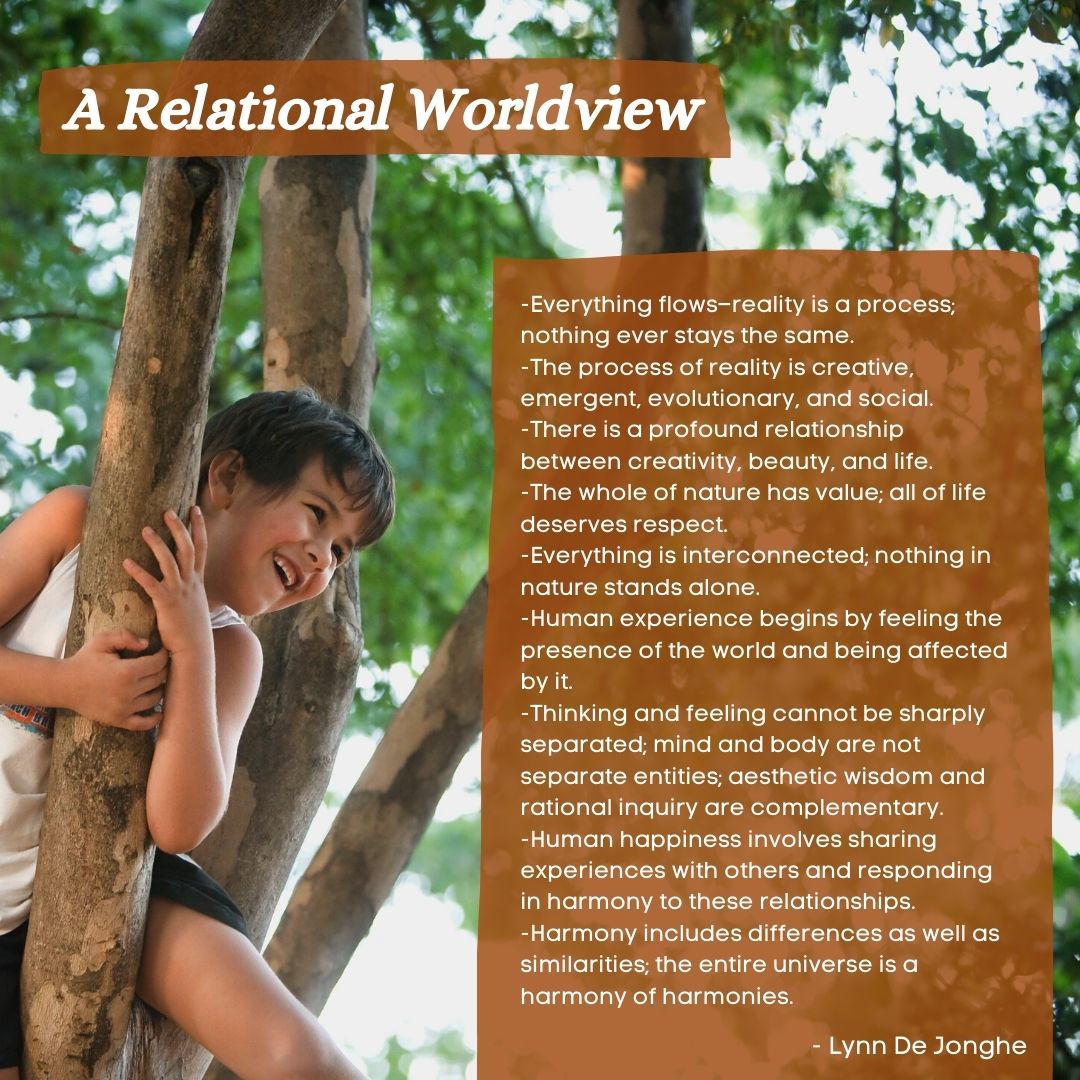 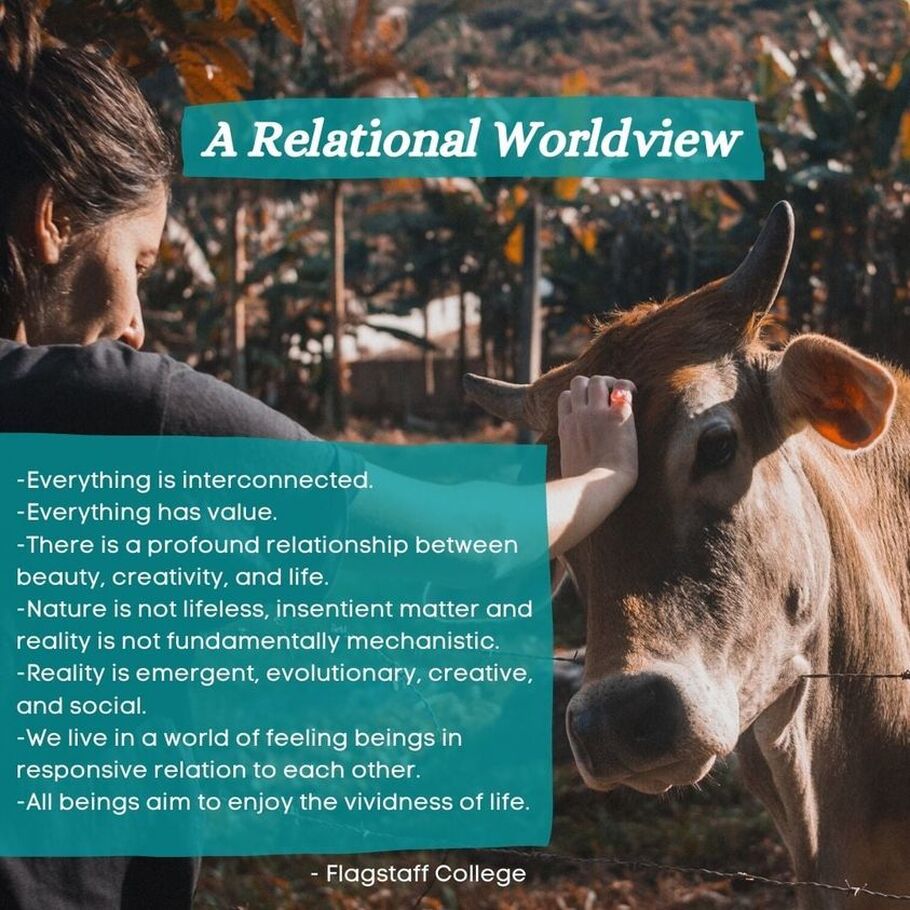 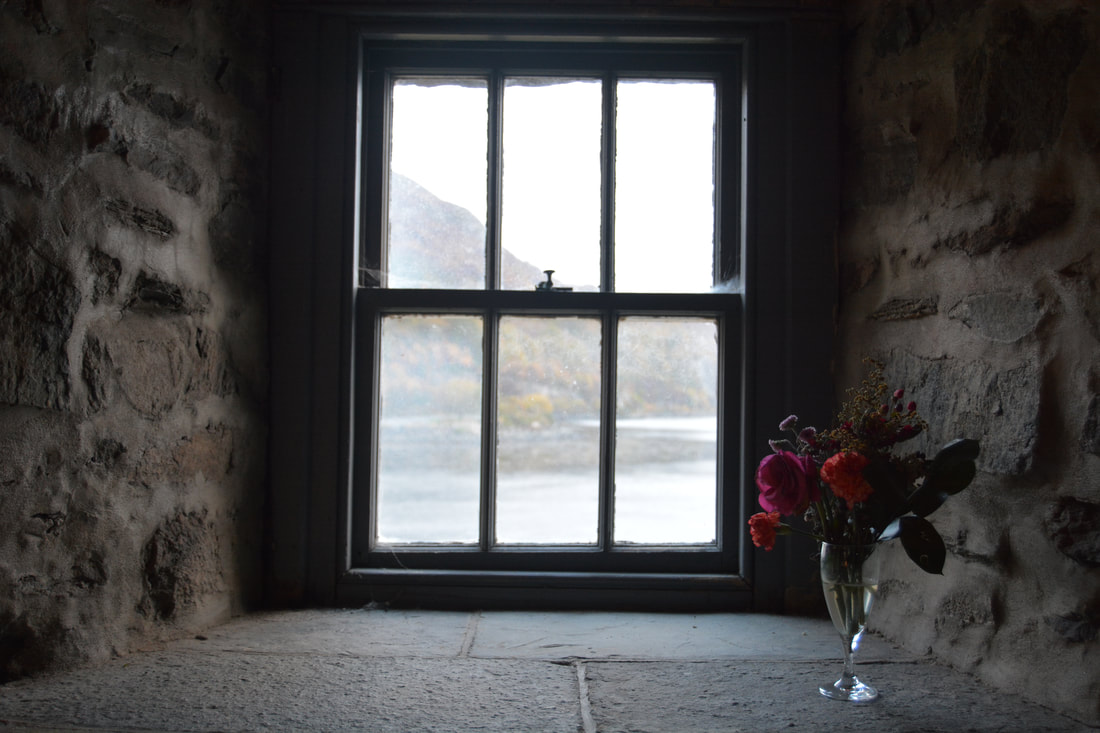 the social ideal of Open Horizons

Ecological civilizatons are the world's best hope.  We humans live within, not apart form, a larger web of life filled with value and beauty.  Our responsibility is to care for the larger whole and for one another.  The building blocks of ecological civilizations are local communities that are creative, compassionate, participatory, inclusive, diverse, humane to animals, good for the earth,  and spiritually satisfying -- with no one left behind.   The social aim of process thinkers is to help build these kinds of communities.  Here are some links to get started:
​

​For us "spirituality" is embodied cognition and emotional intelligence in everyday life.  In the wheel of spirituality below, you will find thirty seven qualities of heart and mind that are part of spirituality.  We borrow the list from one of our partner organizations: Spirituality and Practice.  In the essays on the left, Patricia Adams Farmer and Jay McDaniel offer interpretations of some of the letters.
​
Open Horizons